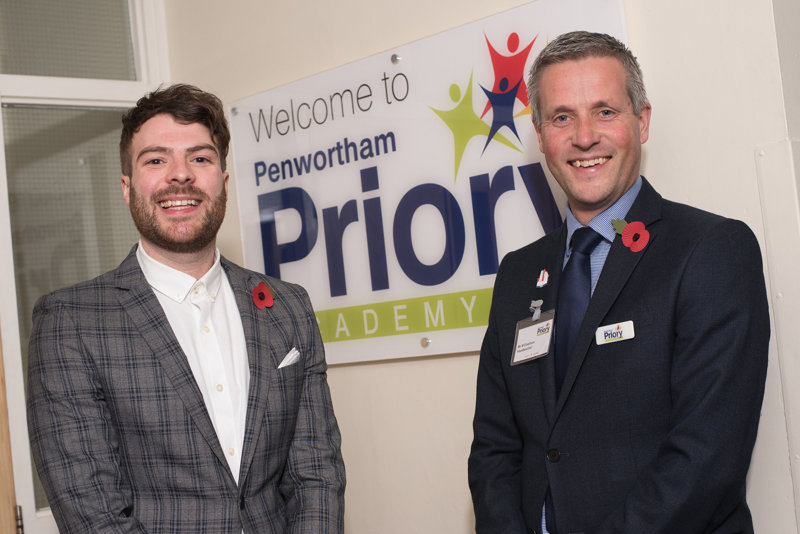 Everyone at Penwortham Priory Academy is rooting for former pupil Jordan North as he takes on the challenge of ‘I’m A Celebrity…Get Me Out Of Here.’

The Radio One DJ, a keen Burnley FC fan, has proved a hit in the castle in Wales and Priory staff say it is no wonder he has bonded with Coronation Street favourite Beverley Callard, who plays Liz McDonald in ‘The Street.’

Assistant Head Mrs Crank, who was his ICT teacher when Jordan was at Priory, said: “One of my many favourite memories of Jordan was when he came into lesson one day and he sat there quite quiet and subdued.

“Having left Jordan for a few minutes to see if he needed time or if he wanted to chat, he then shouted at the top of his voice ‘Oh no! I’ve forgotten to set record for Corrie tonight for me and my mum!’

“We all laughed and Jordan then continued to share with the class not only how much his mum meant to him, but his love of Corrie and what was happening in ‘The Street’.

“Everyone in the class was just drawn in by him as he talked about the characters and the storyline, and he ended with: ‘You lot don’t know what you are missing by not watching Corrie!’”

Jordan left Priory in 2006 but returned in 2018 for the school’s annual awards evening, to present prizes and give a speech. “I actually felt nervous giving a speech!” said Jordan at the time. “I came to Priory from Years Nine-11 as I travelled around a lot as my dad was in the army. I absolutely loved it.  I left school with GCSEs, mostly Bs and Cs.

“Mrs Crank was good to me and I still keep in touch with her. I also liked Miss Wilson who taught me English, she had a big influence on me, and Mrs Scott, who has retired. She was my form teacher and she took no nonsense!”

“Jordan was a brilliant student. His personality shone in every lesson and he worked hard and gave his all. He got on with everyone, including staff and pupils, and he would always share his favourite TV viewings, including his love of Coronation Street.

“He enjoyed school in general, but his favourite subjects were English with Mrs Wilson, sadly she passed away a few years ago.  She always brought out the best in Jordan and allowed him to shine at any opportunity.  Mrs Scott (Head of Music, when Jordan was here) was his form tutor and he had a wonderful relationship with her and she always saw Jordan’s potential.

“Jordan also enjoyed Mrs Crank’s ICT lessons where they’d often talk about music, updates on current soaps and his family, as well as completing the work set. Every lesson with Jordan was one to be enjoyed and he brightened up the day.

“Jordan had a bubbly personality, we recall his friendliness with everyone and he was always considerate, kind and thoughtful.”

Mr Eastham, a Preston North End fan, does recall one special time which showed Jordan’s humour – and love of the Clarets!

“He showed his cheeky side the year Preston North End got through to the Play-Off final in 2005 at the Millennium Stadium against West Ham.  Being Head of PE back then, in order to support our home town club, I said that any PNE fans could wear their PNE shirts for PE lessons in the week leading up to the final.

“It’ll come as no surprise then to know, given Jordan’s love of Burnley, that he turned up to PE in his Burnley shirt instead!

“I sent him an email the other day to wish him all the best with ‘I’m a Celebrity’ – though of course he won’t get it until the experience is all over for him.

I said, to make up for that week when I allowed everyone to come into school wearing PNE shirts – when he wins…I’ve said I’ll wear a Burnley shirt for the day!”

Everyone is rooting for Jordan.

“We’ve always supported and believed in Jordan,” said Mr Eastham. “When he worked at Rock FM, he kept in touch and told us how things were going and when we heard he was moving to London to take up work at Radio 1 we’d get in touch and wish him all the luck.  He knew this move wasn’t going to be easy but we all believed in him and even now he keeps in touch with Mrs Crank and the family always listen to him on Radio 1.

“As for doing I’m A Celebrity, we are delighted to hear Jordan is on the show and are glad people are seeing the real, true, honest, kind-hearted Jordan.“