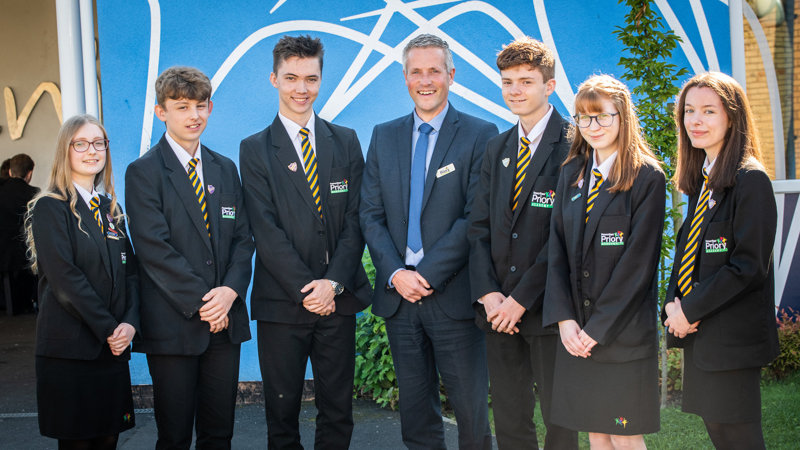 Headteacher Mr Eastham had his official photograph taken with the new senior prefect team as they all promised to make Priory ‘an even better place' to learn.

Head Boy Charlie admitted the whole team had to go through a rigorous process of writing a speech, campaigning and ‘being organised’ to become a senior prefect.
“I was surprised when it was announced I was Head Boy,” said Charlie, who wants to train to be an architect. “I know it will be a good year for us and I can’t wait to get started.”

Charlie's sister Lillie was Deputy Head Girl last year. "She was jealous of me being Head Boy!" he laughed.

Darcy is the new Head Girl and admits, after her final year at Priory, her dream is to secure a place on the Musical Theatre course at Preston’s College.

“This year is a big year but I am really friendly, I enjoy public speaking and I love an audience!” she said. "I remember when I came to school at Year 7 and how daunting it was and I want to help the new Year 7s settle in and feel comfortable and for the school to keep evolving.”

Deputy Head Girls are Josie and Emily – the field was so strong that two deputies were selected!

Josie, who wants to study at the new Maths College in the future, said: “I always give 110 per cent in everything I do and it’s important to have someone who is motivated in these roles. I am a really friendly person and I want to be the kind of person people feel comfortable approaching.”

Emily added: “My younger sister is at Priory and I know how nervous she was coming into school. I want the younger pupils to feel relaxed. I remember everyone was so much taller and larger than life when I came into school but I want to show I am on their level.” Deputy Head Boy Bailey said: “I have had a phenomenal time at Priory, it’s been a rollercoaster at times but it’s been exceptional. I have loved my fellow pupils and the staff and I want to pass this on, I want the younger pupils to feel safe and happy here, as I have been. We want to make it even better!"

Fellow Deputy Head Boy Matthew said: “I have enjoyed my time at Priory so it’s nice to be able to give something back. My younger brother is in Year 8 and I want to make sure he enjoys his time at Priory as much as I have. This position is also good on my CV for when I apply to colleges.”

These will include presentations, speeches, Open Evening talks as well as meetings with the Senior Leadership Team about the effective running of the school, among other responsibilities.