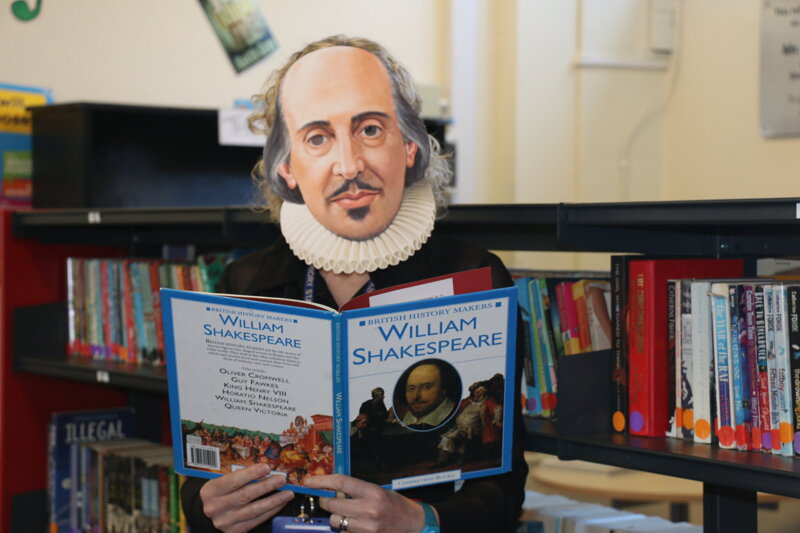 Infamously, Shakespeare died on his birthday, 23rd April, which fell on a Saturday this year so we celebrated on Thursday instead.

The greatest writer who ever lived wrote over 40 plays and poems that are still read, studied, watched and performed all over the world today so it was only right we spent a day in homage to 'The Bard'.

The celebrations kicked off with Mr Taylor's MABAL music selections. All the songs were by a Billy, a Bill, a Will or a Williams; from Billy Joel's 'Piano Man' to Robbie Williams' 'Angels' to Will Smith's 'Men in Black' all the songs were by a famous 'Billy' of sorts - giving a nod to the most famous Billy.

Mrs Cowell celebrated with edible gold on her cakes in Food Tech, paying homage to the Shakespeare quote 'All that glitters is not gold' from The Merchant of Venice.

And, in tribute to all these famous quotes and phrases, Mrs Ham had her RE class design quills, which indeed was the instrument with which Shakespeare wrote all his plays.

Meanwhile in English, classes learnt about why we're still so mad on Shakespeare 400 years after what would have been his 458th birthday and debated how many current authors would still be famous by the year 2522!

In their English lessons, Key Stage 3 insulted each other using fabulously creative Shakespeare inspired nouns and adjectives such as 'Thou foul smelling, shag-bearded clot hole!' and 'You lilly-livered, fancy-mongering lout!' to much amusement. Nobody could 'throw shade' quite like Shakespeare.

Some of the English staff even dressed up: Mrs Gidden as the conniving and unhinged Lady Macbeth, Miss Nicholls as her 'partner of greatness' and hero of the Scottish tragedy, Macbeth, both covered in 'blood' and looking demented; Mrs Robinson-Ali looking ethereal as Queen of the Fairies, Titania from A Midsummer Night's Dream; Miss Smith as the lovestruck Romeo from Shakespeare's Romeo & Juliet and finally, one of the English staff dressed up as 'big Bill' himself, complete with hambone frill but can you figure out which of our staff was dressed as Billy Shakes? It really was remarkably life-like. (see main pic - answer below)

Years 9, 10 & 11 were particularly good at guessing who was who as Year 9 and 10 are both studying Shakespeare in class at the moment and Year 11 are reconnecting with their Macbeth study in the run up to their final exams.

Who will the Year 11 'Class of 2522' be sitting their exams on? My guess is it'll still be Shakespeare - an oldie but a goodie! Answer:  It was Mrs Elliott!