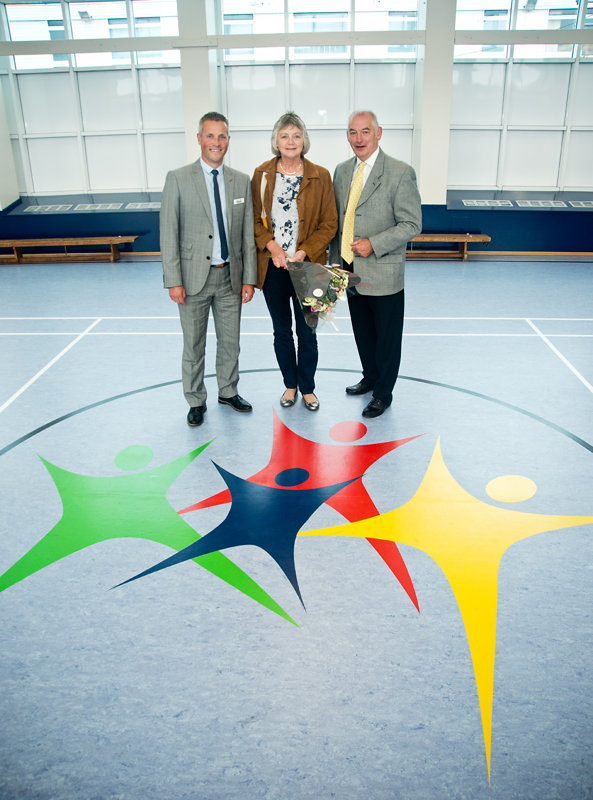 Priory invited its former long-serving PE teachers to open the new £50,000 gym refurbishment on Thursday after an unforeseen postponement in July.

Kate and Dave Rhodes were both one-school teachers who met at Priory.  Kate worked at Priory from 1971 before retiring in 2004, while Dave was there from 1976-2010.  Both returned to open the state-of-the-art gym this week at the invitation of Headteacher Mr Eastham, who started his career at Priory in the PE department under Kate and Dave’s guidance.

“Both Kate and I only taught at one school and we have great memories of our time at Priory,” said Dave.  “We have a lot of good feelings for the school and this gym was a big part of our lives.  It was back in 1953 when the gym was built and 1976 saw the link up with the leisure centre, something which was unique for a school at the time, and now it’s been upgraded again. It’s a new era for Priory and the school is in good hands.”

Gone are the old wooden bars – they have been turned into planters for Priory’s experienced gardener Chris Farron to utilise – and the ropes and beams. They have been replaced, in the last six months, by new windows, a new floor with the Priory logo built into it and new equipment.

“We have continued a tradition at Priory where we asked people to return who have a connection with the school and who it means a lot to,” said Mr Eastham.  “They were my mentors when I was at Priory and are important in Priory’s history.”

Staff, governors and guests were treated to a sports-themed afternoon tea and fruit punch served by pupils Libby Taylor, Olivia Tomlinson and Brook Hendrickson-Flynn.  Music was provided on the piano by Luci Florea and Joel Gardner.

There are to be further new developments at Priory with work on a new £1.4m IT suite, replacing the old ROSLA block, to be started shortly.