No red card for Priory's pupils 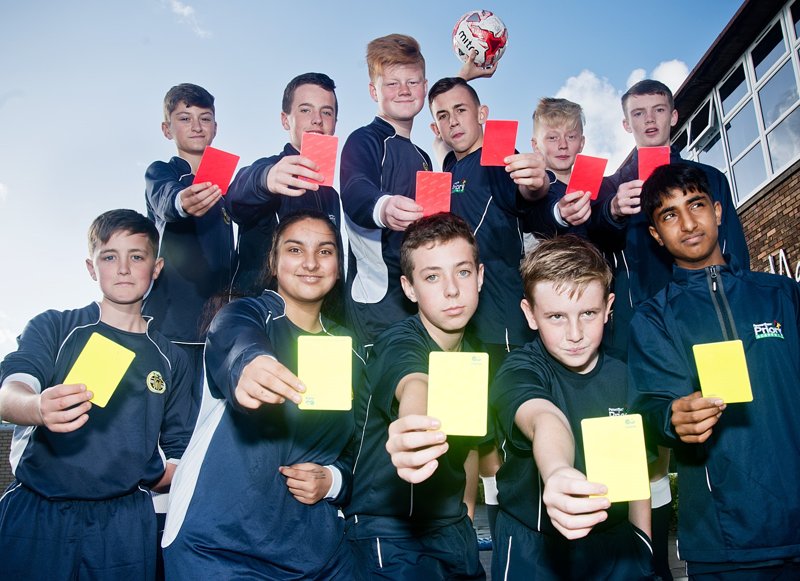 The Priory pupils are hoping not to show too many cards as they take on the role of a referee.
The Lancashire Football Association ran a Football Laws Awareness Course at school and pupils from Years Eight to Ten took part.  Following the completion of the course, pupils were able to complete the Basic Referee Course where they can referee in the local leagues.  It means Priory can provide officials for the South Ribble Primary School Central Venue Football which is held on Priory’s pitches.
“Students were selected due to their excellent commitment to extra-curricular sport,” said Mr Bullock, Head of PE & School Sport at Priory.
Twelve year old Harrison Aubrey-Williams, said: “I wanted to be a referee as I play football and sometimes I feel they give the wrong decisions.  I want to be a fair referee.”
“If I do not make it as a footballer, I would like to be a referee. I want to be the next Mike Dean,” said young referee, Byron Mason.
Ayesha Akhtar added: “I got selected to train as a referee and I want to carry on. I find it interesting. I play football so this is another aspect to it.”
Mr Bullock said: ‘‘We are delighted to be able to host primary school football on our football pitches and, with our new crop of trained officials, we are sure that the tournaments will continue to be a success.
‘’The course for referees gives the students a broader view of the game as previously they have only seen it from that of a player.
“They have seen how difficult it can be to take charge of a game, but are relishing the opportunity to put their skills and knowledge they learnt on the course into practice with the upcoming football tournaments.”