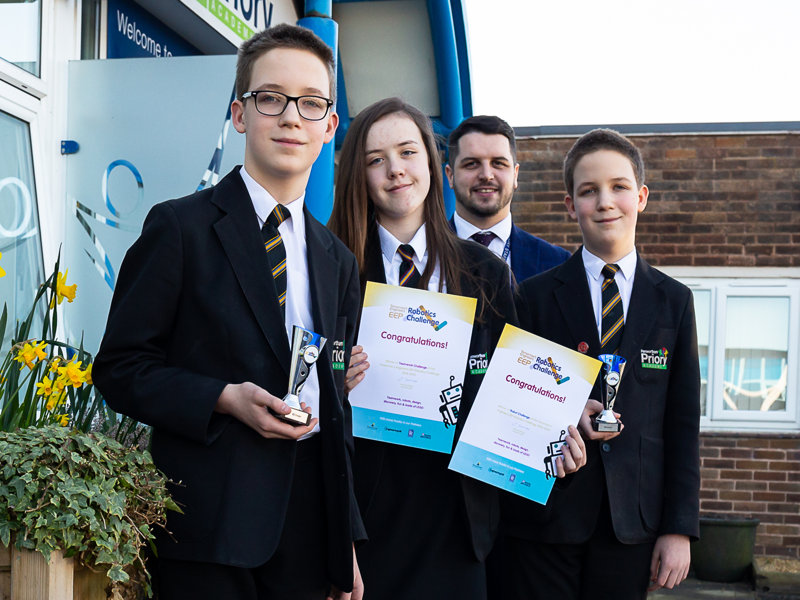 The Robotics Challenge is a national competition for students aged 11-14, based on STEM (Science, Technology, Engineering and Maths) and is in partnership with BAE Systems, Rolls Royce and the RAF to name but a  few.

The programme started in November where students were challenged to programme a self-built robot to complete a range of challenges which they undertook at Preston’s College this week.

Tom and his twin brother Alfie along with Rhianne won the prestigious Robot Challenge trophy as well as the Teamwork Challenge award, all under the guidance of Maths teacher Mr Sneddon, who runs the Lego Club every week.

“The Robotics award was the main one we wanted to win,” said Alfie. “You had to build a robot to do certain tasks such as collect engine parts; a plane; an engineer, and bring them back. It required a lot of skill and expertise.  There was an activities board and we completed all the challenges.”

As a team of three, Priory was a small team compared to the other nine schools competing but they celebrated success in the Teamwork Challenge as well.

“We had seven minutes to build a structure out of paper which would hold a water bottle. You only had five sheets of paper and sellotape and you had to use as little as possible,” said Rhianne.

Mr Sneddon said: “I am proud of all three of them. There were five awards up for grabs on the day and we won two of them. They developed skills in public speaking, presenting and problem solving as well as representing Priory superbly and coming away with two trophies.”