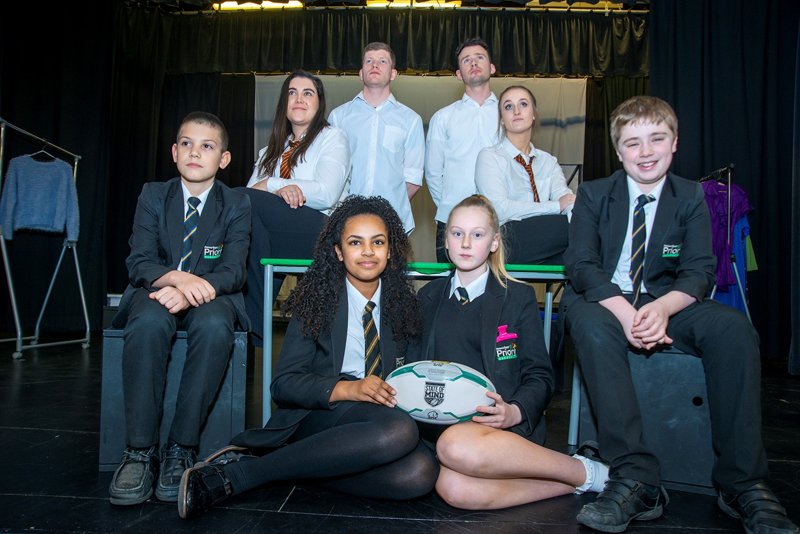 Priory pupils watched a moving performance to help them to understand issues of mental health and what they can do to assist those in need.

Altru Drama Group explored issues of suicide, self-harm and parental depression through their performance, centred on a rugby player called Jamie who is destined for the top until a bad injury halts his career.This forces him to withdraw, he doesn’t talk about it and, in the final scene, the audience finds out his has committed suicide with the emphasis on how sad this is, how it affects other people and how, if Jamie had opened up, he might not have taken his own life.

There is also a character called Caitlin whose mum has been struggling with clinical depression for a number of years and how Caitlin cares for her and uses websites to gain support and Ruby, who used to self-harm but how, on reflection, she realises it didn’t help her.

The young people in the play talk about coping strategies for teenage life and give each other positive coping mechanisms which the audience can use.

The session was for Year 7s and 8s to encourage pupils to talk, to get things out in the open and emphasise that there are plenty of people willing to help.

Miss Ackers organised the event and said: “It was powerful for the right reasons, this message needs to hit home. It upset some pupils but it explored important issues that you need to speak about in school.

“It’s important to have a knowledge of mental health and it was about educating our pupils.

“The play was designed to raise awareness of mental health and give our pupils the skills to recognise the signs and help each other.”

Pupil George said: “It was very powerful and you shouldn’t underestimate mental health, you shouldn’t just dismiss it, it’s more serious than that.”

Kayla said: “I learnt that it’s important to ask people if they are ok and not to judge them.”

Bryanny said: “It was sad that the people in the play didn’t talk to anyone and it helped to show that there is always someone to talk to, it’s important to open up.”

Josh added: “I learnt that you shouldn’t judge anyone, everyone has their own feelings.”

The story is acted out in a very sensitive and careful way – with the emphasis that Jamie had options to talk to people and open up.   The play ends with the young characters promising always to talk to each other, and to their families, about their issues and never to keep things inside as Jamie did.