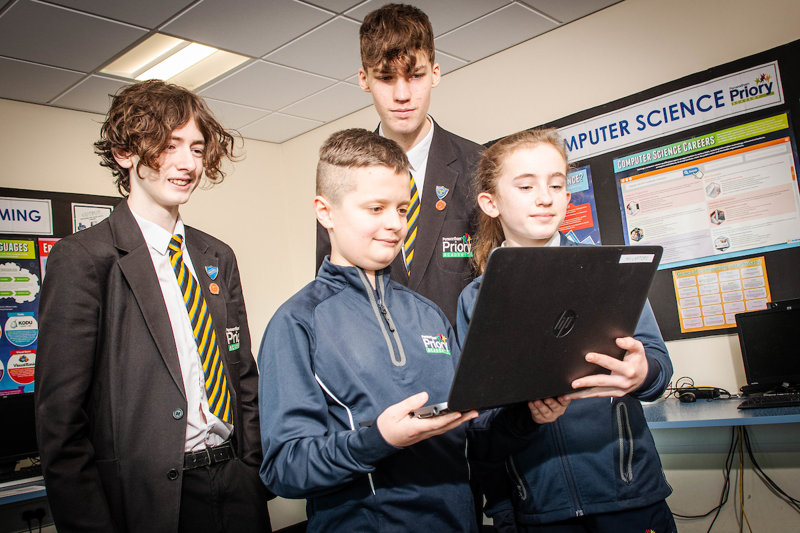 Pupils at Priory were cracking codes and solving puzzles in their own innovative way as part of a Code Breaking Competition in Computer Science.

Head of Computer Science, Mrs Qadri, set pupils from all years various challenges using Caesar Code (shifting the alphabet forward or back), Pig Pen Cipher (replacing letters of the alphabet with shapes or symbols) and Morse Code (dots and dashes).

They then had to create their own codebreaker and provide its solution which the Year 11s particularly embraced to demonstrate their skills - with Jack K designing his own website!

“The competition was really popular,” said Mrs Qadri. “A lot of different year groups took part and it was a bit of fun but also to get the pupils thinking about Computing.

“I was impressed with the Year 11 boys especially as they put a lot of effort into their challenge and took it to another level.”

The winner was Year 11 GCSE Computer Science pupil James M who used the Python Code for his challenge.

“I made a script using Python programming language. I enjoyed doing it and I would like to take my Computer Science further, at least to A-Level. I enjoy learning how things work and having the ultimate control.”

Year 11 Jack K came second and he built his own website jackisamazing.uk/cipher.

“You type in the text you want to encrypt and it applies it with a series of functions and then outputs the encrypted text. To decrypt it you do the same functions in the opposite order.

“I have been working on the website for over a year and it was amazing when it worked.

“I want to go on and do Computer Science at A-Level and maybe at university. I want to be a web designer.”

Year 8 Abbie was third after making her own code using all things festive.

“I came up with my own idea for a Christmas code breaker using Christmas symbols. A few of my friends cracked it but I didn’t make it too easy.”

Year 7 Alan K was joint third: “I broke the code Mrs Qadri set, which was based on school, and that inspired me to do one of my own, which was also about school. I used Morse Code and symbols. I was happy to come third.”

Other pupils who took part in the competition said they enjoyed the challenges and love Computing.

Year 10 Megan takes GCSE Computer Science and said: “It’s something I enjoy, it’s fun. I enjoy coding and the hexadecimal and binary systems. I would like to go to university and study it.”

Hannah has been learning about eSafety in Year 7 and said: “It’s really important to stay safe on-line so it’s been useful.”

Year 7 Harriet said: “I want to take Computer Science further as it will help me in the future, as I want to be an engineer.”

Year 8 Emily added: “In Year 8 we are learning about programming so I am always learning new things in every lesson. I want to be an Astronaut so it will hopefully come in useful!”

We’ll be including some of the pupils’ codebreakers in the school newsletter over the coming weeks so you can have a go yourself.