A hockey hat-trick for Priory 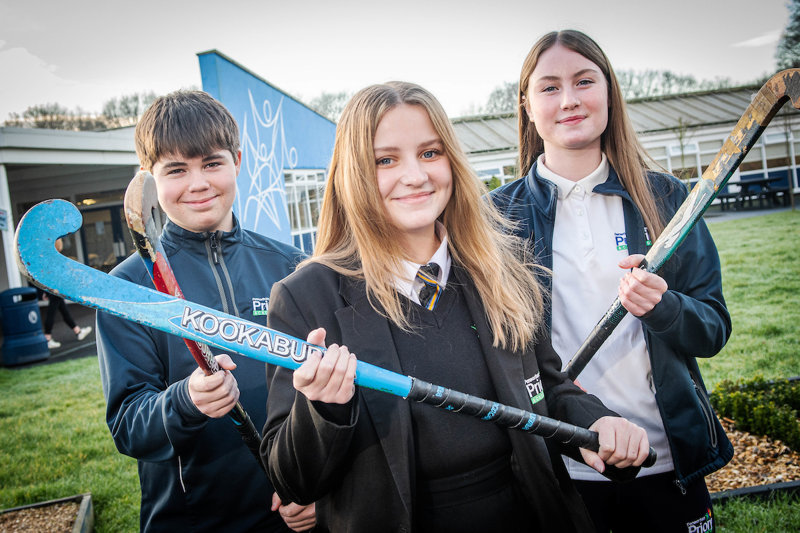 Last week we met up with five of our sporting stars - Oliver, Umar, Phoebe, Martha & Jack - whose dedication and hard slog is getting the results they deserve.

It’s a hat-trick of successes for Priory pupils as they have hit the big time with their hockey skills!

Year 10 Phoebe has gained a coveted place on the England Hockey Performance Programme for 2021/22 while Year 9s Josh and Martha have been selected to represent Lancashire Under 14s, after all came through tough trials.

All are members of Preston Hockey Club and what makes their achievement even more amazing is that they are in a minority in their squads as they are from a state school, with most county and national hockey players coming from independent schools which have funding to play hockey regularly in school.

Phoebe has been attending Performance Centre trials over the last few months, which is the England hockey pathway which could lead to elite level hockey.

She has represented Lancashire at Under 12, 13 and 14 level and was nominated by her county coaches to attend the England trials.

64 girls started out at the North West trials at Fylde, with Phoebe up against girls from Cumbria and Greater Manchester as well, and she was selected in the final 36.

Phoebe, 14, who plays left midfield, said: “I have been playing hockey for five years, my mum is the Junior Head Coach at Preston Hockey Club, so I got into it through her. I train five days a week.

"There were eight trials and it was really nerve-racking as it was so competitive.  When I got the email to say I had been selected for the Performance Programme I was excited.  I have started attending their training events in Fylde. My dream is to play hockey in the Olympics.”

Martha, who plays right midfield, attended six hours of trials for Lancashire Under 14s at the AKS School in Lytham.

“I have played for Lancashire at Under 13 level and then went for Under 14 trials,” said Martha.  I like hockey as it’s really fast. I train five times a week and it’s exciting to receive the Lancashire kit and represent your county.”

Josh, 14, has been selected for his county Under 14s as well.

“I got into hockey through my dad and while I can play any position, my favourite position is right wing.  I have been at Preston Hockey Club for 11 years, I have been playing almost all my life and played for Lancashire Under 13s.  The trials were at Fylde Hockey Club and they were tough but I was happy to get through. I don’t know how far I want to take my hockey, I just enjoy playing it with my mates."

Mrs Bolton said, “Phoebe, Josh and Martha all have the odds stacked against them and all have done exceptionally well to be selected for their county and upwards. They went into trials against pupils from independent schools who have around 4-6 hours of hockey a week within school, play inter-school competitions at weekends and have extra hockey training at school.

“They play so much more hockey at independent schools while Priory is similar to the majority of state schools where hockey is not a sport in focus and that’s just the way it is. It’s meant all three have had to work extra hard to make their impact. I am Under 13s Lancashire coach and 60 girls are invited for trials for 20-24 places and the majority are from independent schools.

“Martha has been selected for U13s and U14s so she is in the top 20 in Lancashire which is a fantastic achievement.

“For the England Performance Centre, you have to be selected to go for the trials and be an outstanding talent. There are 16 Performances Centres around England which have a squad of 24 in each and Phoebe is in the minority coming from a state school but all three haven’t let it deter them.”

Well done to all three of you and we look forward to hearing more about your successes in the future.