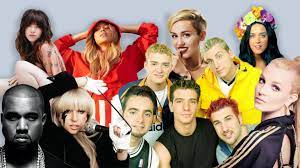 This week it's all about: The Noughties

In the 2000’s, the popularity of teen pop carried over from the 1990s with acts such as *NSYNC, Backstreet Boys, Britney Spears, and Christina Aguilera dominating the charts in the earlier years of the decade. Contemporary R&B was one of the most popular genres of the decade with artists like Usher, Alicia Keys, Beyoncé, and Rihanna.

In Britain, Britpop and alternative rock were at the height of their popularity with acts such as Coldplay, The Libertines, Oasis, Travis, Dido, Blur and Radiohead.

Hip hop music achieved major mainstream status after the 1990s following the deaths of many prominent artists such as 2Pac and The Notorious B.I.G.

Country music continued to rise in sales, having a strong niche in the music industry. The genre saw the rise of new front-runners like Taylor Swift, Carrie Underwood, and Miley Cyrus, who appealed to a mainstream audience.

Electronic music was also popular throughout the decade; with genres such as trance, chillout, house, and Eurodance being popular.

The internet allowed for unprecedented access to music and made it possible for artists to distribute their music freely without label backing and for consumers to create their own unique playlists as opposed to being restricted to the CD album of the 1990s.