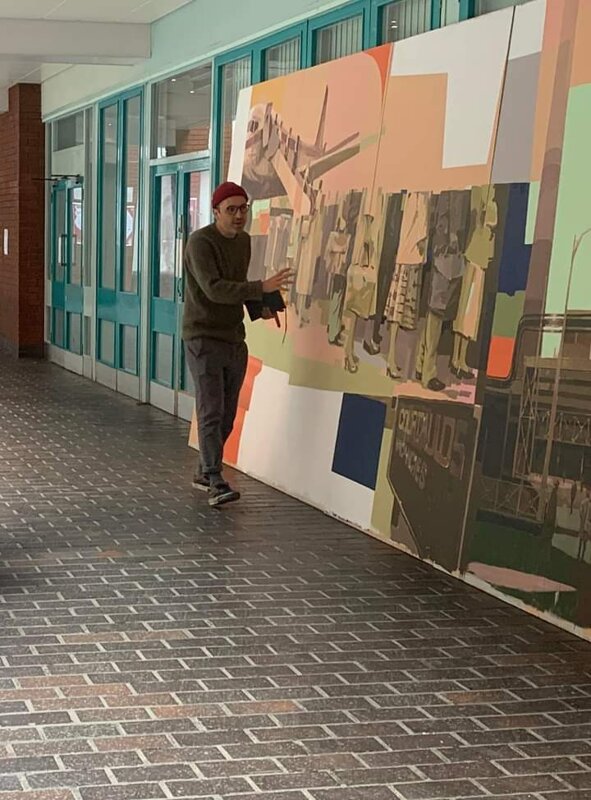 Prior to lockdown plans were afoot for Priory pupils to work with a local artist on a project featuring Preston Docks, which would be exhibited in the Harris Art Gallery. The project was part of an ongoing partnership between The Courtauld and The Harris. Then Covid struck and The Harris closed for refurbishment until 2024.

When everything reopened, The Courtauld contacted Lead Teacher of Art, Mrs Hopes, and asked if we would like to be involved in another project, alongside another school and the local artist. Mrs Hopes excitedly agreed.

The brief was then set:

During the period of around two years, The Harris will be surrounded by temporary hoardings and the front section of these is to have a mural created by a local artist and two schools. The Courtauld is working with Year 9 pupils at Penwortham Priory Academy and Christ the King Catholic High School to create a mural for the hoardings that will use art and art history approaches to draw from the themes of industrial heritage and migration to Preston.

In each school the project planning was delivered by artists Toya Walker and Gavin Renshaw through a series of short sessions delivered virtually and in person and one whole-day workshop in school. Pupils worked independently and in collaboration to respond to a series of practical activities, using their artworks to plan the mural design.

The aims were to:

The mural is currently being painted by Gavin Renshaw #mrteaone in preparation, undercover in the locality. Gavin’s large scale art works can be seen across the country and in Avenham, Preston.

Gavin is part of the Paint Preston project and has worked in collaboration with many local artists including Colin Binns and Turner Prize Winner Lubaina Himid, whose work pupils are all familiar with. Most recently, Gavin assisted Chris Dorning #cunningcraftsman on his mural on the Black-A-Moor pub in Preston.

Mrs Hopes said, "On 24 May a group of pupils who worked on the planning went to see progress so far on the mural. Pupils spent the hour discussing with Renshaw how he planned and developed this particular piece and his other pieces. Pupils also asked him about all aspects of his career and his art as part of their careers exploration."

The mural is due for completion in June and will be installed before we finish for the summer break. At which point, all pupils involved will be invited back for a celebration gathering to receive thanks for their input.