D-Day for B Block 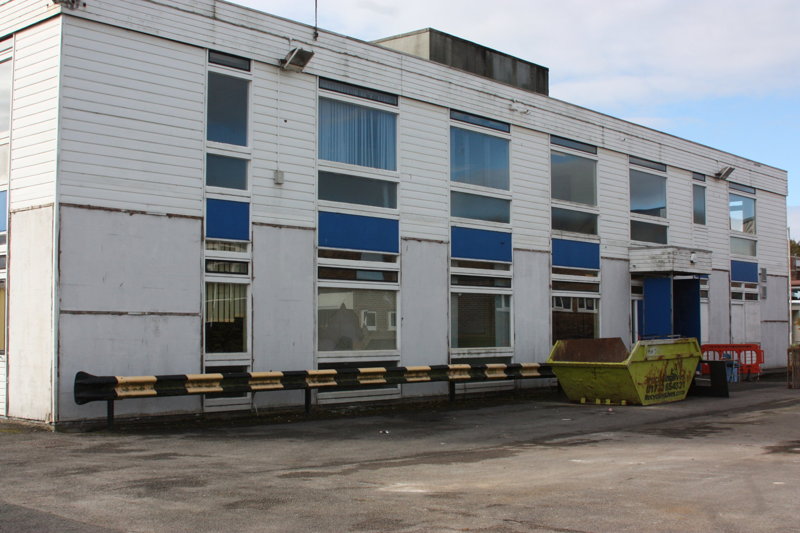 Building work on Priory’s new £1.4M IT suite and community space has finally begun this week. Fencing has started to be setup around the site area and compound cabins have been delivered after work was temporarily delayed earlier this year due to bats!
Funding from the CIF (Condition Improving Fund) through the Education Funding Agency will be spent on knocking down the old B Block, or ‘ROSLA’ block as it was also known, and building a new IT suite along with a space downstairs which will be used by the school and the community.
The ROSLA block (Raising Of The School Leaving Age) was built in the late 1960s when the school leaving age increased, as a temporary structure with a timber frame. Priory last used the ROSLA block in 2015 as a temporary measure while the new science suite was being built.
.
The project was delayed after bat maternity roosts were found near by and, because they were so close, the noise could have caused the bats to leave their offspring.
The new building will be energy efficient with a heat recovery system, air conditioning and plans for solar panels.
Mr Bolton, Priory’s Facilities Manager said, “It will be a slow start for the next few weeks whilst they start to strip out items internally in the building so it won’t look like much is happening until they start the full demolition in November”.
“We have to expand the school to meet the demands of the numbers of students who want to come here and we want to offer them the best facilities to make the most of school life”, said Mr Eastham, Headteacher.
“The IT suites will be upstairs and then there will be a room downstairs which, in evening and weekends, can be used by the community for classes, parties or as meeting rooms, we want everyone to get the most out of it.”