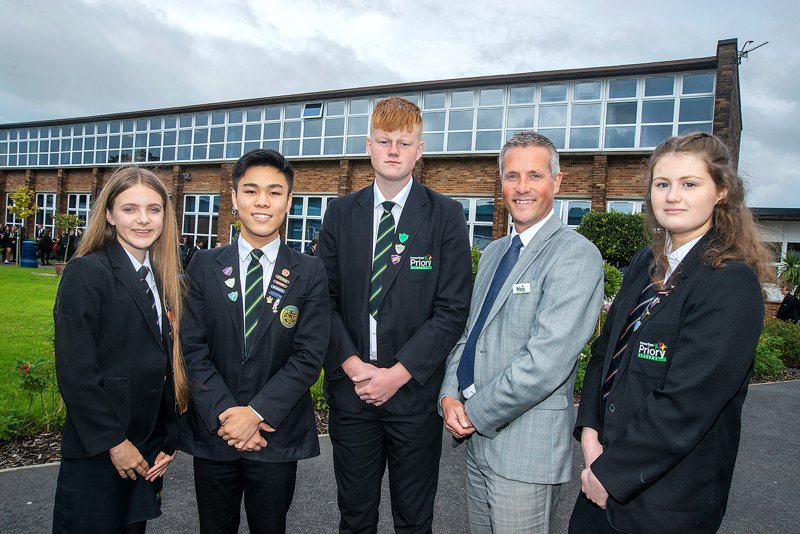 Priory’s new Head Boy and Girl, along with their deputies, have big plans for their school year ahead.

Year 11s Colin and Sasha, along with deputies Olivia and James, have just started their ‘term of office’ and they want to implement ideas that will be used by students for years to come.

“We want to put in place building blocks for the future,” said Head Boy, Colin.

“One idea is to establish year representatives so we can get their perspective and insights about the whole school. We want to put an infrastructure in place which can be used by future students.”

Head Girl, Sasha continued: “The Student Council is currently Year 11s but we want to extend it to make it a big Student Council which includes other year groups.  We will be having meetings soon so we can start to implement our plans.”

The quartet had to go through a rigorous process to be selected for their roles by Mr Eastham and his Senior Leadership Team.

“I was nervous giving a speech in front of the entire year group,” said Olivia. “I was pleased to get through it and now I just want to help to implement our ideas which will benefit the school.”

As well as being Deputy Head Boy, James is also Sports Captain. He plays football for AFC Fylde’s Academy as well as playing American Football for Chorley Buccaneers, where he is captain of their Under 17 team.  “My big passion is sport so I will help in any way I can to promote sport within school and help at school events,” said James.

Prefects Take Up Their Duties

The new academic year brings extra roles for many of Priory’s Year 11 pupils.  Lunchtime and break duties, attending school functions and generally taking an active role in representing the school are a large part of being a prefect.

Criteria for the selection of prefects is published at the end of Year 10 and after a rigorous application process where pupils must demonstrate why they would be suitable for the role, House Progress Leaders/Heads of Year collate the entries and make their choices.

Hustings and elections that follow culminate in the appointment of Head Girl, Head Boy and their Deputies, House and Sports Captains.

Prefects are an important aspect of Priory’s reward system. Year 11s are given this responsibility to show they can represent the school in a positive and mature manner.  Congratulations to all our prefects (too many of you to list individually here) that have proven they can do this.