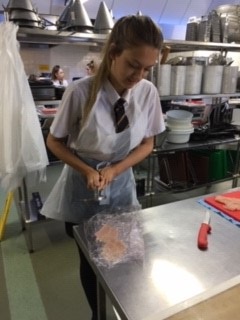 On arrival pupils were split into two groups and were tasked with providing lunch for three other schools alongside attending lectures. Pupils were shown how to fillet chicken breasts and pipe their own Duchess potatoes.

Year 10 pupil, Jack, said, "I particularly enjoyed the catering. First off, we cut chicken breasts. Next, we sliced the mini fillet off the breast. After this we dipped the breasts in yolk so that the flour and breadcrumbs could stick onto the chicken. Then we did the same with the mini fillet. We filled the breast with shredded Lancashire cheese. For the other part of the meal, we cracked an egg and used only the yolk to stir into mash potato. This was then piped onto a baking tray. This is called Duchess potatoes. I really enjoyed my trip to Runshaw College and enjoyed seeing students and staff enjoy the food we’d cooked."

The meals were greatly appreciated by students and staff a-like and Priory students were commended on their professional and polite manners whilst in the busy kitchen.

Mrs Willis, learning support, who accompanied the group said, "I was so proud of how hard our students worked. They took on every task that was thrown at them and rose to the challenge. The meal was simply divine."

After lunch pupils had the opportunity to participate in activities provided by the Travel & Tourism department. On entering the classroom, the students were confronted with a full Boeing 747 with seats and overhead lockers. Whilst belted into their seats the students were shown how to complete an emergency landing procedure.

Completing the exciting day, each student was taught how to perform the cabin crew's safety demonstration. A chorus of ‘sit down, heads down, brace, brace’ could be heard throughout the campus!

Pupil, Liv said: "The tourism lesson was really good. The teacher started off by getting to know us individually by asking us what our dream holiday destination would be. Then we did some tasks on tourism. In the classroom there was a pretend plane which we could sit in where we learnt the ‘brace’ commands. After, we learnt the flight safety demonstration which was really good fun. Finally, we were asked to plan our own events, such as, weddings, parties and proms. I really enjoyed my day."