Priory girls hit the highs at Lancashire Academy for Hockey 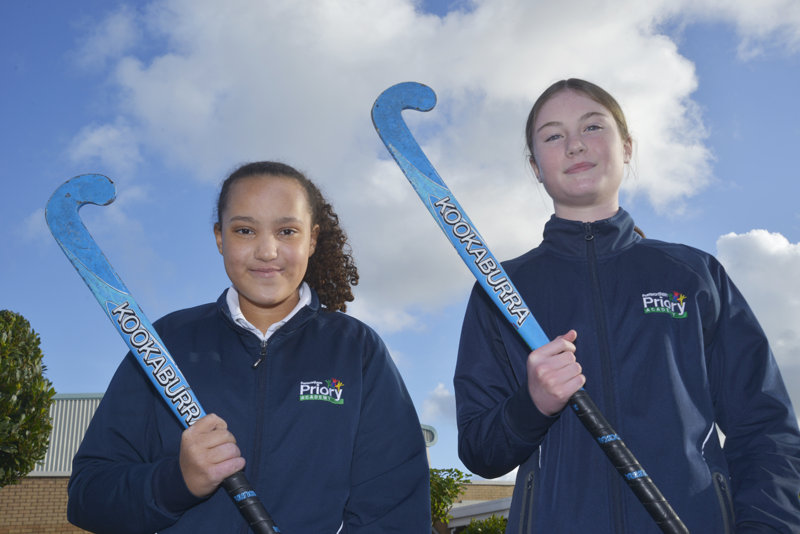 Three Priory pupils are hitting the highs after being selected for the Lancashire Academy for Hockey.

Year 8 pupils Martha and Aluna came through tough trials to qualify for their county while Year 9 pupil Phoebe, after two years of competitive trials and representing Lancashire, was automatically selected for her age group this year.

Martha is a right midfielder and Aluna plays in the centre of defence, both play for Preston Hockey Club.

“I got involved with Preston Hockey Club through a friend a couple of years ago,” said Martha. We train three days a week and we were asked to go for Lancashire trials at AKS School in Lytham.”

Both girls attended trials last year and didn’t get on the county squad but this year was different.

“We got an email to say we had got in the Under 13s group,” said Aluna.

“Due to lockdown we haven’t been able to train yet but we are both looking forward to it. I enjoy hockey, it’s a

Martha added: “I like hockey because it’s an exciting game, it’s fast, it’s technical and you meet new people. I was happy when I got the email to say I had been selected for the Academy.”

Phoebe, who also plays for Preston Hockey Club, said: “I got into hockey through my mum who plays. I play left midfield.  I was in the Lancashire Academy for Under 12s and Under 13s and had to come through trials for them but this year I got into the Under 14s automatically. It’s exciting to represent your county.”

Proud PE teacher, Miss Beesley said: "All girls took part in after-school sessions with hockey coaches and it's great they have access to the sport outside school at Preston Hockey Club and have carried on their love of the game.

"They are three talented girls, who are all a credit to the school, and it's great they have been selected for the Lancashire Academy, where they will play at a higher level and test their skills."