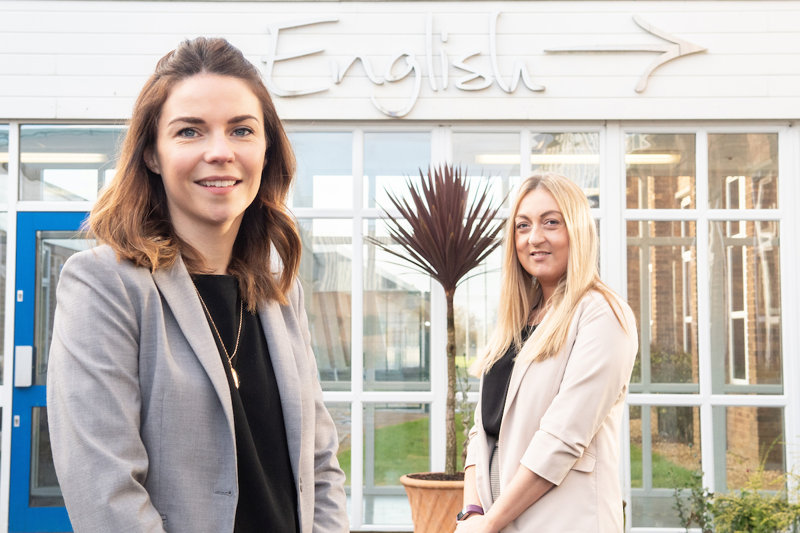 Wow - What a year we’ve had in the English faculty. I’d like to take this opportunity to go over our ‘best bits’ of the year and mention, again, the children  that make Priory a wonderful place to work, learn and flourish. started with us having to separate our beloved library into four trolleys so that the ‘show could go on’ even though we couldn’t have mixing in the library. We are so incredibly proud of how our library has grown and how often and enthusiastically it’s used by all pupils in school during AR lessons and beyond. We wouldn’t have been able to do any of it without our student librarians and our library assistants who have had to help this year moving trolleys back and manually checking books in and out on the system. The library continues to grow and watch this space for our new layout in the library come the Autumn. The Autumn brought about two exciting competitions in the department The Postcard competition which Lily Rose of Year 7 won; and the bookmark

competition which Olivia C of Year 7 won. Both new designs will continue to be used for the coming year given that they haven’t been used much due to the school’s closure in Spring.

Christmas brought out annual Year 7 speech competition and this year which had to be run virtually due to the hall being closed due to Covid. We missed Mr Taylor compering this year as I stepped into the role. Well done again to our winner Daniel McC - truly brilliant speeches. wait for the Speech comp 2021, when Mr Taylor will hopefully compere for us again; we can have a proper judging panel and who knows which of our Year 6s will take home the trophy this year?

In December, our Year 11 cohort were treated to a live streamed Blood Brothers workshop by Stage Ed with real life actors and stars of the West End cast of Blood Brothers. Year 11 were able to pick their brains about characterisation and stagecraft in their GCSE Literature text. ool close, but our staff and pupils worked hard to keep things going in the normal way.

Year 9 saw the introduction of a new competition, designing a piece of Votes for Women literature in line with their work on women’s rights as part of our Of Mice and Men unit. Brad C came out on top with that, bagging the £20 voucher prize.

In Year 7, we saw the launch of the Poetry competition, and again, the standard was incredibly high with Josh L taking the top spot this year. We also celebrated World Book Day remotely with staff sparking conversations about books by sharing their favourite stories. Students were challenged with a code breaker that spelt out the code: PRIORY READS and from the amount of entries we had, it’s clear we really do! Naturally, there was a competition to design a cover for your favourite book where Hollie H (Year 9) was chosen as the overall winner with her 'Into The Pit' design. Upon re-opening the school, one of the department’s most interesting projects was Mr Owen’s work with Rise and Shine Lancashire, raising awareness of the plight of the homeless in line with our work on Stone Cold by Robert Swindells. Pupils from across Year 8 not only engaged with the t hemes of the class novel but turned their increasing frustration with community stereotypes into a huge positive by helping this local charity campaign for extra funding. Using the persuasive writing skills they developed during lockdown, pupils wrote formal letters to the Police and Crime Commissioner outlining why those without a place to sleep deserve assistance with basic necessities that we often take for granted. The quality of writing was astounding.

o, upon the re-opening, we launched the software Bedrock with our Year 8 cohort, and the leader boards have been a joy to see throughout the last two terms. Bedrock has accelerated the progress and vocabulary acquisition of all our Year 8s so much so th at we have invested in the software for both our Year 8 and Year 9 cohorts next year.

Year 8 adored competitions so much that Mr Owen decided to launch another exciting project in the summer term. Pupils were introdu ced to Shakespeare and 16th Century life via Much Ado About Nothing. Despite this being a comedic play, the front cover of the book was desperately in need of a modern twist, so we tasked pupils with designing their own front cover. Masquerade balls are clearly intriguing to this year group; several entries focused on this fashion-centric 16th century tradition.  More at >> https://www.priory.lancs.sch.uk/news/2021-07-16-much-ado-about-competition-winners d to a live audience with the author of both the ‘Once’ and ‘How to Train Your Dragon’ series Cressida Cowell! As well as being hugely entertaining, engaging and informative, the pupils were thrilled to hear their question being answered first out of the hundreds that were submitted! Super exciting.

The late spring saw all our attentions shift to Year 11, their centre-based assessme nt and the marking of these. We know our Year 11 cohort put everything into those final crucial weeks.

Although so many things couldn’t run as normal this year, we are so grateful for our pupils’ efforts and impressed by their achievements. We also want to extend our love and appreciation to Mrs Isherwood who is leaving the department after two wonderful years with the team. Good luck in your new adventures.

We also want to bid farewell to Mr Faulkner who is changing roles this year and whilst he’s staying in the Priory family, he will be missed. New beginnings are on the horizon as we welcome Miss Nicholls to the team and look forward to a new and exciting year with lots of exciting things ahead.

Thank you for your hard work and have a lovely summer.

Mrs Gidden, Mrs Webster and all the English Department