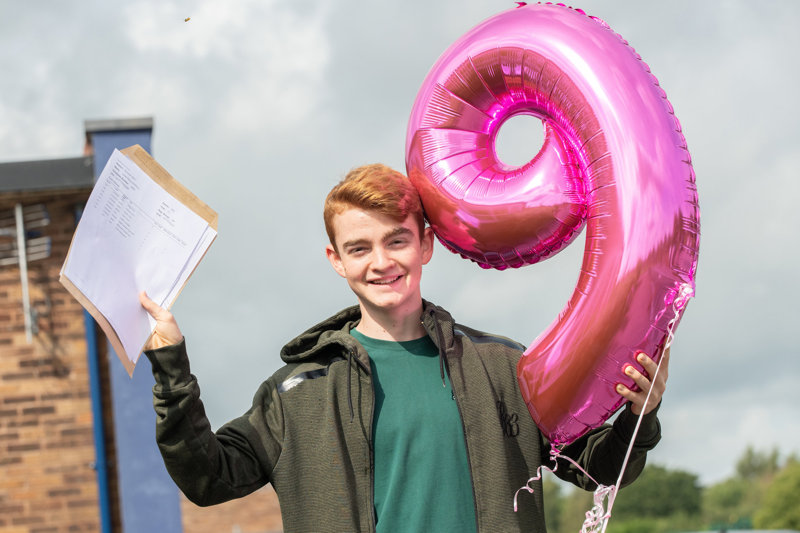 We are immensely proud of all the work and achievements of all our pupils, especially after such a difficult and disrupted year.  Here are the boys' stories...

Head boy, Louis admitted he was shocked when he opened his results, achieving five Grade 9s, two Grade 8s and a Grade 7.

“I did not let myself dream of getting 9s, I thought about 7s as then I wouldn’t be let down but it’s amazing to get so many Grade 9s!

“My biggest surprise was achieving a Grade 9 in English Language.”

Louis has taken part in school productions and has secured a place at Runshaw College on their Professional Performance Programme.

“The course is all about singing, musicals, acting and dancing. Hopefully it will lead me to an audition for a performance college.”

Ben has his sights set on becoming a graphic designer.

Ben achieved amazing results with a Grade 9, two Grade 8s, a 7/7 in Science and another 7, alongside a distinction in graphics and a distinction star in engineering.

He will go onto Runshaw College to study A-Levels in Graphic Design, 3D Design and Maths.

“I obviously love graphic design!” said Ben. “It was great to have the chance to study graphics and engineering in school as not many schools give you this opportunity.

“They are new courses and I really enjoyed them.

“My dream job is to have my own graphic design firm.”

Dan admitted he was surprised to see the Grade 9 next to French!

“I do enjoy French but I never expected a 9,” said Dan.

He also achieved two Grade 8s, a 7/7 in science, one 6, two Grade 5s and a distinction in engineering.

“I want to go to Runshaw College to study French, Engineering and Computer Science but I am not sure what I want to do in the future.

“It’s been great having the chance to study engineering at Priory.”

Ishaq celebrated a 9/8 in science, a Grade 8 in maths with a Grade 7 in further maths, as well as a number of other Grade 7s and two 6s.

“I want to go to Newman College and study maths, chemistry and geography.

“Being at Priory, it helped me enjoy science a lot more.”