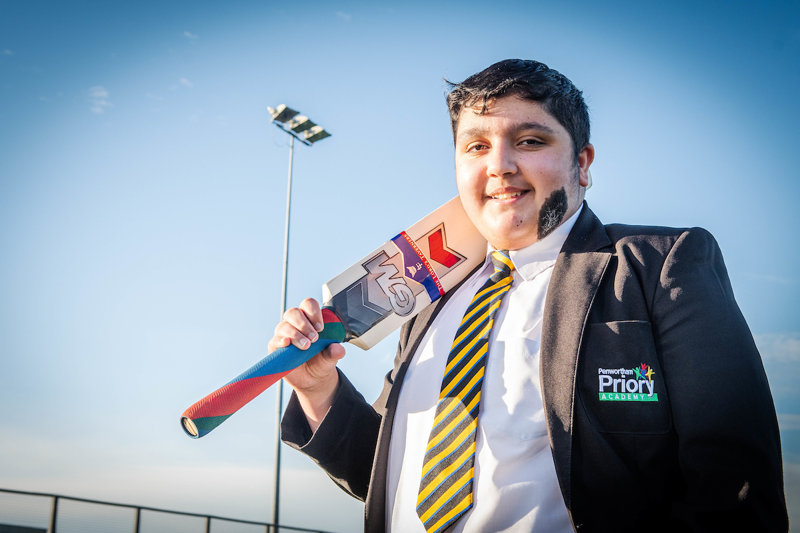 This week we met up with five of our sporting stars - Oliver, Umar, Phoebe, Martha & Jack - whose dedication and hard slog is getting the results they deserve.

Year 11 pupil Umar will be featured on your television screens as he shows off his cricketing prowess.

Umar is taking part in a TV programme where he is being coached by former England and Lancashire all-rounder Andrew Flintoff, now a presenter.

The programme is a BBC Three series where ‘Freddie’ Flintoff will put together his own side in a bid to change people’s perspective of the sport.

From Preston, the former England international visited under privileged parts of Lancashire to find 11 teenagers for his side who will be called ‘Freddie’s First Eleven.’

It was for teenagers who had not considered the sport before and challenging the idea that cricket is a game for the posh and privileged.

“I liked watching and playing cricket and I was involved with the BYDS Youth Club in Broadgate and got selected from there,” said Umar.

“They said they wanted to do a documentary about cricket and give people like me an opportunity which I might not otherwise have. It was filmed every Tuesday at Preston’s College.

“We were trained by Andrew Flintoff, who is really down-to-earth, and Kyle Hogg as well.

“They taught us different types of cricketing skills and it has been really good. I would say now I am a bit of an all-rounder.

"We played a game in the Lake District recently, that was against adults, but the idea is for our team of teenagers to play against league teams made up of people around our own age.

“I have been interviewed a lot for the programme and they have been to my house and interviewed my family as well.  I am not sure when it is being released but I am excited.”

If Umar doesn’t make it in cricket or in the TV world, he has his sights set on helping to change the landscape of places.

“I love Geography and I want to be a Geography teacher and take a PHD and become a professor in Geography.
I just enjoy the business side of urbanisation and development.”