She did it - Year 11 pupil becomes national champion 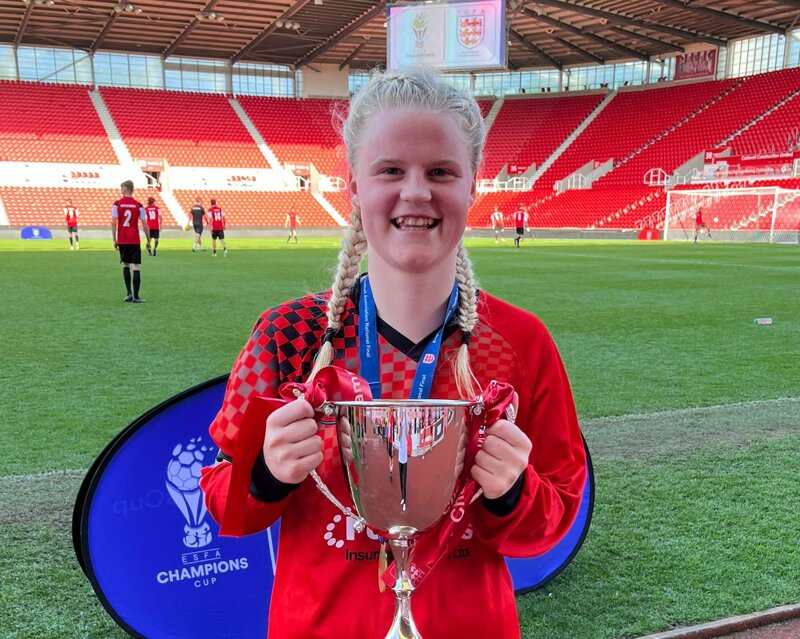 It was the English Schools FA National Finals last weekend and we are extremely delighted to announce that one of our Year 11 girls led out a winning Lancashire team.

The girls travelled down to the BET 365 stadium, the home of Stoke City FC, and the game was broadcast live on the ESFA's YouTube channel.

Being the captain of the title holders, expectations were high for Jazmin and the girls to ensure the trophy stayed in Lancashire.

It was a baking hot day and a difficult, demanding game against a good Kent side but Lancashire came out victorious and won the game 4-1 which resulted in Jazmin lifting the trophy with her team mates, in front of family and friends.

This, sadly, is the final game that Jazmin will play for Lancashire. However she has had an amazing journey with Lancashire Schools FA which started in 2018 when she was one of the 200 players that trialled for a place in the squad.

Dad tells us, "Jazmin has travelled the length and breadth of the country representing her school and Lancashire over the last four seasons and has won the accolades of:

Jazmin will now start to focus on her new footballing chapter as she will shortly sign for Everton u20s for the next two years on an elite football and educational programme.

We wish her the best of luck!