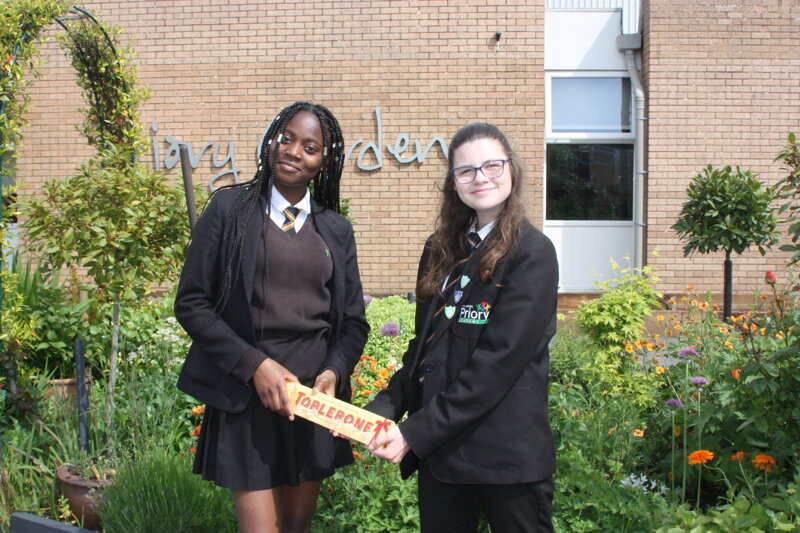 Year 10 Scarlett has raised almost £90 in her school raffle and Year 9, Favour was the lucky winner of a giant Toblerone.

For Deaf Awareness Week earlier this month, Scarlett kicked off her annual campaign to support the event.  Scarlett, who wears cochlear implants, also raised £75 from family and friends to add to her school fundraising  total - all of which will be donated to CICS, a children's support group for those with the implants.

Favour's winning ticket was picked out in the raffle although she admits she's not a fan of chocolate but will be sharing it with her family. And after hearing about next week's Ukraine fundraiser, she is already thinking about what she can do to get involved!

Scarlett was diagnosed as deaf as a baby but cochlear implants changed her life. In 2009 she became the first patient to be fitted with the thinnest ever cochlear implant at Manchester Children’s Hospital. It meant Scarlett could hear for the first time and, due to her operation, she has become a part of the Cochlear Implanted Children’s Support Group (CICS).

Scarlett would like to thank everyone for their continued support since it's her last year doing this event - next year she will be busy with her GCSEs! Scarlett also wanted to let everyone know that she's very excited to get her new implants soon too  -  the Nucleus 7 cochlea implant.