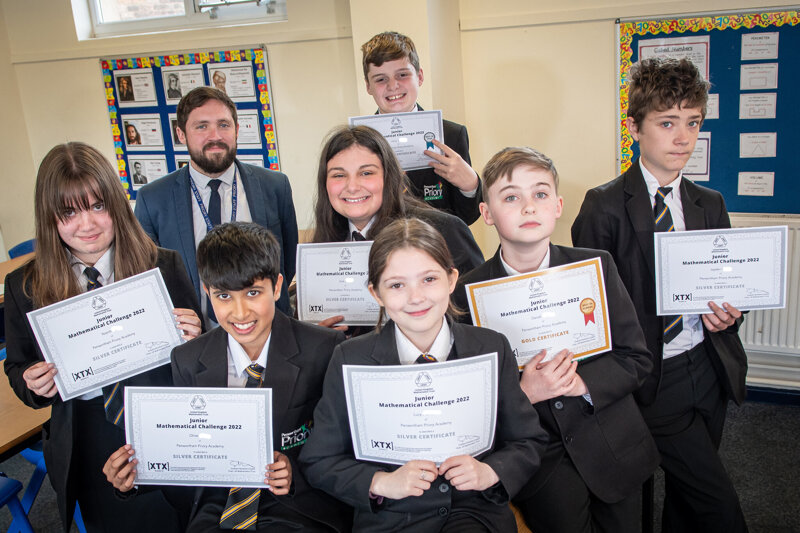 Year 8 Daniel M was ‘Best in School’ at the recent Junior Mathematical Challenge (UKMT) as he collected a Gold Award.

Around 60 Priory pupils in Years 7 and 8 took part in the hour-long, multiple-choice national challenge.

Maths teacher Mr Hunter said:
“To recognise the highest performers in the Challenge, the top-scoring 50 per cent of participants across the country are awarded with Bronze, Silver and Gold certificates.

“Daniel was our ‘Best in School’ with a staggering 101 points from the 25 questions while Oliver S was our ‘Best in Year 7’ and these also received a badge on their certificates to denote this.

“Many received the Bronze Award and pupils not among the high scorers received a Certificate of Participation.
“There was some outstanding problem solving by our Priory pupils. It’s great to have these maths competitions back in school, especially in Key Stage 3.”

Daniel said: “I wasn’t expecting a Gold Award. I can do maths quite well and I enjoyed the challenge.”  Evie said: “It was a fairly difficult Challenge with a lot more logic than expected.” Lucy said: “As it was multiple choice, a lot of it was a process of elimination.”  Best in Year 7 Oliver S said: “I am proud to be ‘Best in Year 7’ and I enjoyed having a go.”

Daniel went through to the next round, the ‘Junior Kangaroo,’ which he sat on Tuesday afternoon. We will receive his results over the coming weeks - good luck Daniel!