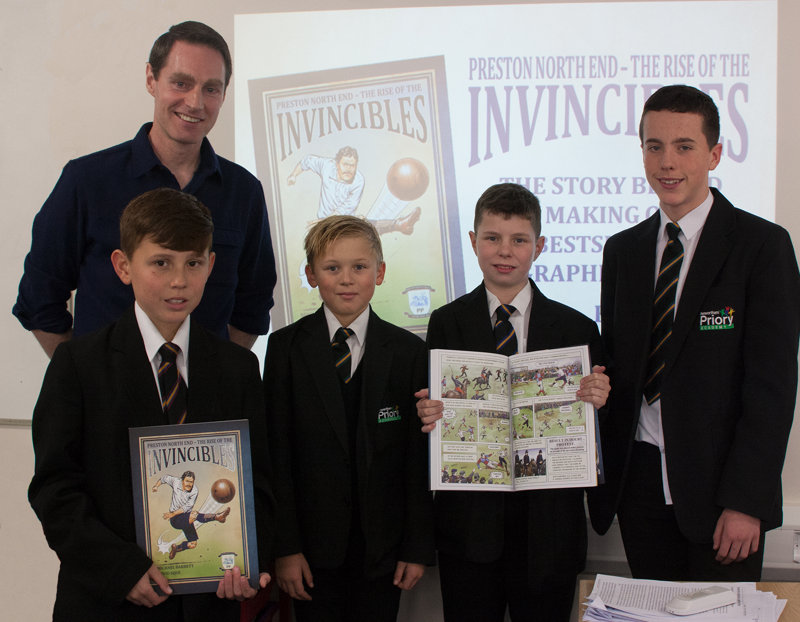 An author hopes to inspire the next generation of writers after holding a workshop at Priory.
Local author, Michael Barrett, has written a graphic novel about Preston North End’s famous league and cup winning season of 1888-89. Michael visited the school to speak to pupils from years 7, 8 and 9 about how and why he wrote his book about the legendary invincibles.
Michael spoke about the trials of producing his book and the pleasures he took in researching and bringing to life the players that he had only ever read about.
Filing through match reports from over a century ago to imagine how the goals had been scored and learning about different players and their characters was a huge part of the process for Michael.
Working with the illustrator of the famous Roy of the Rovers comics, David Sque helped Michael to accurately bring the goals that were scored to the pages of the graphic novel.
After speaking with pupils about how he created his book, Michael helped them to write a narrative about other famous football stories from their lifetime.
Michael was keen to help them understand the importance of planning a successful story using more recent examples of footballing heroics.
English teacher, Mr Howarth said: “Michael held a hugely successful workshop with the group. Through research and carefully exploring how to develop story ideas, all students came away inspired to both read and write more. They all thoroughly enjoyed it.”