Astronomy club pupils have something out of this world 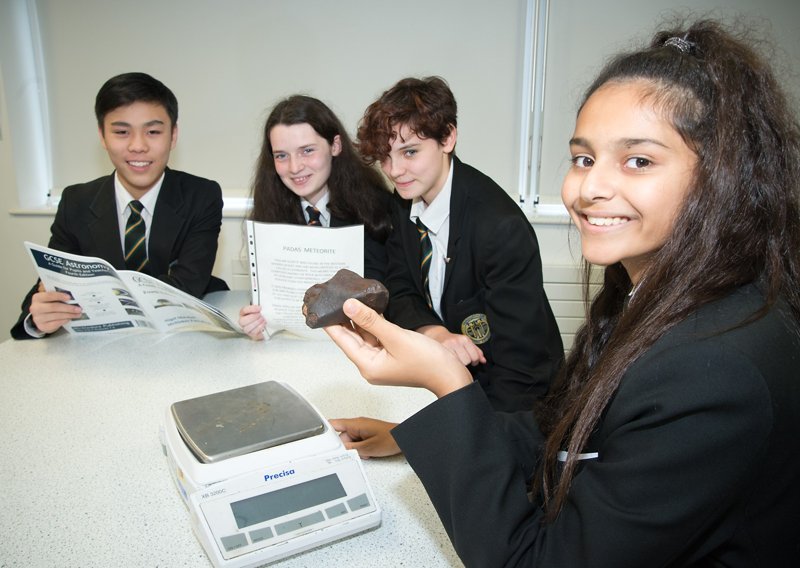 These Priory pupils are certainly reaching for the stars – and they have a piece of meteorite billions of years old to prove it.
We are one of the few schools in the area which offers an Astronomy GCSE.
Two years ago three Priory students took the exam for the first time and received A* grades including Jamie Edwards, who became the world’s youngest person to create nuclear fusion aged 13.  Assistant Headteacher, Ms Young, also took the exam, got top marks and is now a member of PADAS – Preston and District Astronomical Society.
PADAS has acquired some meteorite which was found in the Western Sahara Desert and has been certified as a type called ‘Chondrite’ meaning it’s composed mainly of rock with small amounts of iron and other minerals. It’s believed to be around five billion years old.
Priory is the first school to be loaned this meteorite from PADAS for our astronomy students, who use the £750,000 open space science labs at the school with their own ‘universe’ on the ceiling.
Four Year 9 students are taking their Astronomy GCSE this year - May Robinson, Miya Atherton-Patel, Verity Buckley and Colin Chan -  and are using the meteorite to help them.
“It’s amazing,” said May. “I have always had an interest in the stars so it’s great to be able to take it to GCSE level.”
PADAS Secretary Graham Mcloughlin: “The PADAS meteorite is a NWA 308g Chondrite meteorite found in the desert of North West Africa.  Chondrites are some of the oldest space rocks left over from the formation of our solar system and contains iron.  It was purchased to give members the opportunity to view and examine a piece of space rock and is popular at our society public outreach events.”