An Indian delight in food technology 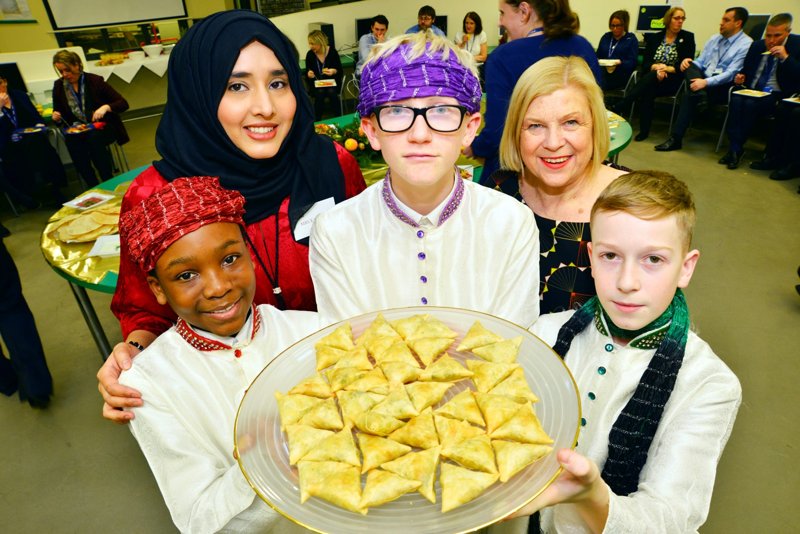 There were aromas and spice as Priory pupils served up a taste of India.
The Year 9 food students have been learning about food choices and different cultures as part of the new AQA Exam in Food Preparation & Nutrition.  They looked at different countries such as Italy, Spain, China, India and Great Britain and decided, at the end of the ‘Celebration’ unit, to organise an Indian-themed event to showcase what they have learnt.
“We knew it would be a test but the students were really enthusiastic,” said Learning Support Assistant, Mrs Karodia.
“We drew up a guest list including the Senior Leadership Team at Priory, governors, primary school officials and other invited guests and then planned a menu and entertainment.  I gave the students some of my mother’s recipes, it was all traditional, and we made Chapattis, chickpeas, potato curry, samosas and other delights.
“The students were so enthusiastic and even volunteered to provide entertainment for the event, including Bollywood dancing. There was a lot of preparation involved but I enjoyed sharing my culture and making the celebration a success.”
One student, Jaequarn Silcott said: “I enjoyed the cooking and the Bollywood dancing. We learnt about spices and herbs and I can now make a special Indian omelette!”
Robyn Wojnarowski added: “We have learnt different methods of cooking from all over the world and also learnt about healthy eating. It’s been beneficial.”
Head of Food Technology, Mrs Lewis-Lavender said: “Mrs Karodia has been very proud of the work the students have produced and delighted that they could showcase their work to others involved with the school. Everyone was impressed.”