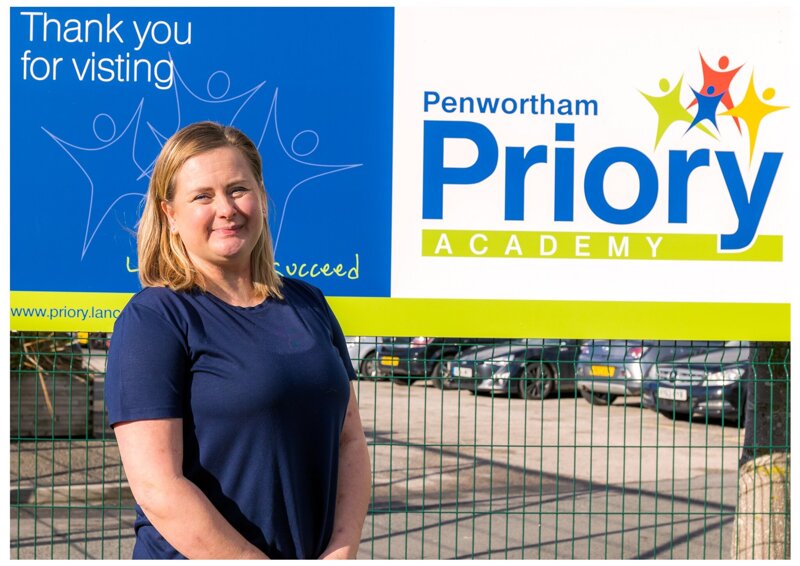 Former Priory pupil Jemma Oliver has travelled the world but is now giving back to the community of Penwortham.

Jemma left Priory in 1997 but returned for our Career’s Fair last week where she talked about her work as a Physiotherapist.

Jemma, now 42, has worked internationally with elite teams, helping GB athletes in athletics, volleyball, bobsleigh and more and was involved in the London Olympics in 2012 as well as the Glasgow and Gold Coast Commonwealth Games with Team England. She has now set up a Physiotherapy practice in Penwortham, at Galloways in Howick.

“It was nice to return to Priory for the Career’s Fair,” said Jemma. “I stayed in touch with the Head, Mr Eastham, so I have been back a few times but not for six or seven years and it has changed a lot.

“I guess you would say I was a bit of a geek at school, I was a prefect and sports captain, and I threw myself into everything. I have fond memories of my time at Priory so it’s nice to give something back.”

Jemma admits that it wasn't always her dream to be a Physiotherapist:  “When I was at school, I wanted to be a PE teacher. I went to college but was always more into science subjects, so I took that route. I did a Sports & Exercise Science degree at Leeds Met, then I went onto study Physiotherapy at Sheffield Hallam before doing a Masters in Sports Injury Management.”

“I worked hard, and it was a dream to travel around the world and work in sport. I have got to say though it was also very tough at times and when you are a therapist, you can occasionally look after everyone else before yourself.  This led to some anxiety and mental health issues which I now talk freely about to help others learn more about wellbeing and mental health.”

“I came back to Penwortham from living in London to be near family and friends and base my new clinic where I grew up. I don’t take a traditional ‘physio clinic approach’ as I believe it should be more about wellbeing and a chilled-out environment.  I take my dog, I have pictures and plants, I want it to be as relaxing and non-clinical as possible.”

“I want to use the skills I learnt travelling the world for the everyday person and the local community. My idea is to keep it simple, I treat pain, injuries, look at lifestyles and use what I have learnt about well-being to help the whole person.”

Jemma also has an Associate Lecturer role at Manchester Met, writes a blog about mental health and encourages people to be open, as well as talking about her travels and of course her time at Priory on other stages.

“I jumped at the chance to come back to Priory and talk about my career and opportunities within my field. If you want to be a Physio you potentially need to have A-Levels but there are other pathways into working as a clinical therapist including Sports Therapy, Sports Rehab and Soft Tissue Massage work.  A lot of children do not know about all the opportunities out there in this field, so it was great to engage with them.”