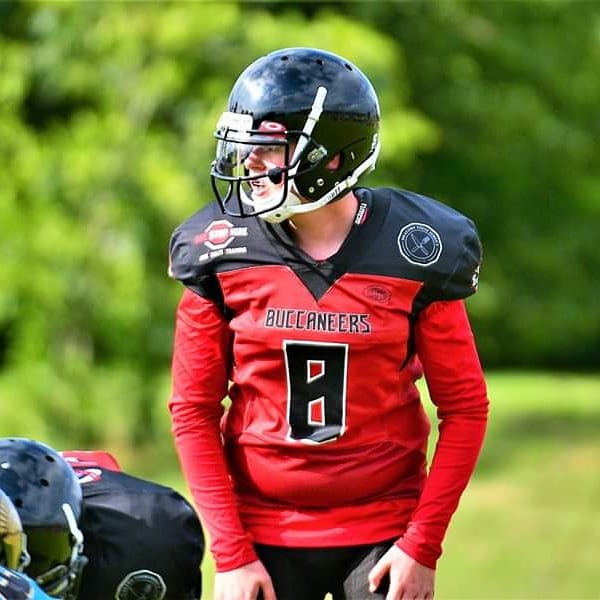 Former Priory pupil Harry has left home at 16 to pursue his dream of being an American Footballer and also to follow his love of sports journalism. Harry left Priory this summer and secured a place on the Sports Journalism course at the prestigious SGS College in Filton, Bristol, partly thanks to his American Football prowess.

His mum Jude says he is now "cooking, cleaning, washing his own clothes and organising his day all by himself – with the odd call to his mum!" as he house-shares with three other boys.

Harry excelled at American Football at Priory, being on the Chorley Buccaneers youth team who were crowned national champions and, despite being younger, he was a key part of their Under 17 side and also had trials for the GB Under 19s squad.

Since then he has been accepted onto the PRIDE College American Football Team after try-outs via video as one of just six quarterbacks, which helped secure his place at Bristol.

Harry said: “I knew I wanted to be a sports journalist from a young age, I have always watched all types of sport and enjoy researching about them as well.  I became very knowledgeable about sport so I knew that journalism would be my future employment plan if making it as a professional American Football player doesn't work out.

“To get a place at the college on the course side of things was fairly easy, once I had stated that I was a part of PRIDE (the American Football Academy).

“I achieved all my GCSEs and the course is a Level 3 BTEC so I had the grades to get on it.  The hardest part of getting in was getting on the American Football Team. Trials this year were cancelled due to COVID so to get in I had to send in game film/videos. Luckily enough I had plenty of this and I managed to make it on to the team as one of the few quarterbacks selected.

“Moving away at 16, I was confident at first because I quickly found

accommodation, and linked up with a few other players moving down to Bristol to play American Football, one of which I know from back home already, so that was a confidence boost.  When I first got down it was tougher than I thought to get used to the new surroundings but I quickly became comfortable with it.

“The course I am on is popular with the American Football players so I had plenty of people I knew in my class, also the team is like a big family, everyone looks after one another and everyone is good mates.

“The course is really interesting because it is something I enjoy.  We focus on all aspects of journalism - camera work, writing, video editing etc.

“As for the American Football, it is in my opinion the closest thing to playing College American Football in the USA that we have in Europe. It was a great achievement when I found out I was accepted onto Filton PRIDE, because it is the elite of the elite for the sport anywhere in Europe, they also have a proven track record of getting their players to the US and also pro contracts in European leagues.

“We play games against European programmes like the French national team, university teams from England and also in the past against high schools from Canada and the US.

“We have training all week long that works with our class schedule so nothing collides. We have our own gym, field, track, changing rooms with ice baths and our own personal physio and also the top coaches in the country.”

Harry thinks being at Priory contributed to him settling in so quickly to his new life.

“I think Priory helped me mature quicker and also helped me with basic life skills to move forward.”